Soon people will start packing their belongings and preparing their summer cottages for the winter. Now is also the time to indulge in late-autumn days on beaches and in parks. However, that doesn’t mean that rubbish should be dumped in nature.

In Tove and Lars Jansson’s comic strip Moomin and the Comet from 1958, Moomintroll is upset over the amount of rubbish that has washed up on their shore and the condition their beach is in. In the comic as well as in the 1946 novel Comet in Moominland, an approaching comet has made the water withdraw from the sea. In the comic, Moomintroll finds himself surrounded by rubbish that once lay on the seafloor and he asks who would like to live in such a mess. Probably none of us.

Rubbish on land is rubbish in the sea

Did you know that 70% of the rubbish that ends up in the sea originates from land and that the majority of the rubbish is plastic? Plastic doesn’t moulder in nature, instead it splits into smaller and smaller pieces – microplastics. Even the sea animals suffer from plastic rubbish, as they often end up consuming it, mistaking it for food. That’s why it’s extremely important not to litter, neither on land nor at sea. Sort your waste so it can be re-used and always bring your hazardous waste to designated waste sorting stations. Avoid single use- and short lived plastic products.

The #OURSEA campaign was inspired by the Moomin stories to clean up the Baltic Sea, while encouraging us all to commit to concrete environmental deeds. Your everyday choices can make a big impact and support a cleaner Baltic Sea – the sea which inspired Tove Jansson and her Moomin stories. 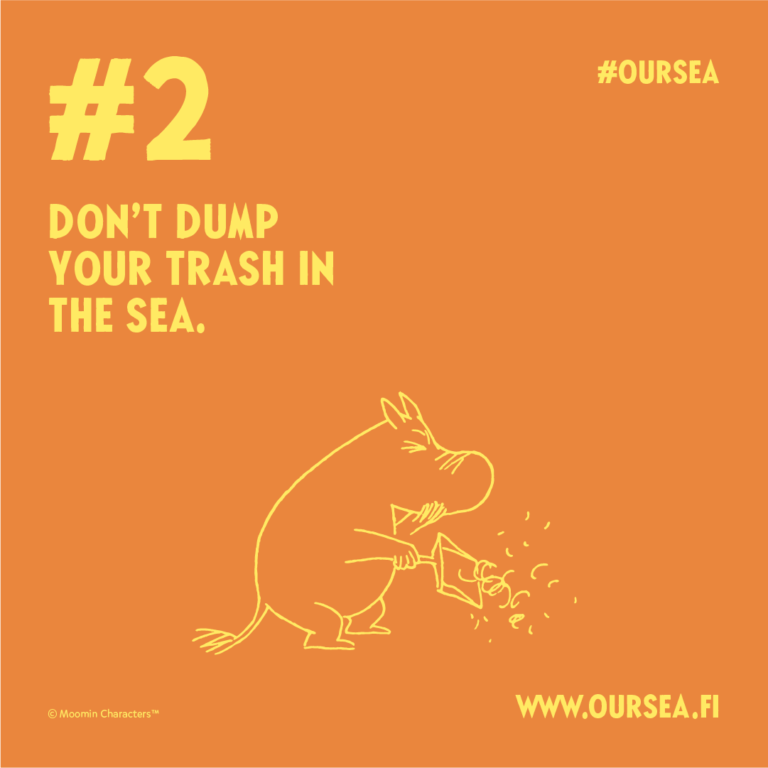 The Baltic Sea is one of the most polluted seas in the world, and the most serious environmental problem facing it is eutrophication. Even though eutrophication has decreased somewhat as of late, there are still clear signs of it which continue to strain the Baltic Sea: large algae bloomings, turbid water and anoxic seafloor. These symptoms are further accelerated by the effects caused by global warming. The familiar games and adventures on beaches and in the sea in the Moomin stories would look quite different, were they took place in today’s environment.

The goal of the #OURSEA charity campaign, created by Moomin Characters and the John Nurminen Foundation, is to increase awareness on the status of the Baltic Sea, and to collect funds for the John Nurminen Foundation’s work to save the sea and its heritage. The aim is also to spread awareness of the condition of the sea that acted as a source of inspiration to the Moomin stories.

You can participate in the campaign either by a direct donation at www.oursea.fi or by purchasing campaign products.