When trying out new waterway protection measures, there can at times be many twists and turns in the road before you reach your goal, and reaching it can take a very long time. When earlier experiences and guidelines just do not exist, you find yourself in a labyrinth, in the depths of which a poor project manager can be left wondering, looking for the way out (even for rather unsettling lengths of time). For me, procuring the natural gypsum for the River Vantaa gypsum project has been just such a winding road. To put it mildly, operation natural gypsum took a while.

There are many organic farmers in the River Vantaa catchment area who right upon the launch of the project declared that they would be interested in gypsum treatment if only suitable gypsum was available. The gypsum we use elsewhere in the project is a byproduct of Yara’s fertilizer manufacturing, and due to organic standards, it is not applicable for use on organic fields, where only virgin natural gypsum is allowed. I was also interested in finding out what are the price levels of mined natural gypsum compared to the byproduct gypsum from the fertilizer industry, which we otherwise use. For this purpose, we set the goal of implementing a small-scale pilot using natural gypsum.

I started out simply, requesting a quotation for natural gypsum from agricultural suppliers.  Even though our contacts struggled to find the right product for us, six months and quite a few product information labels later we had to conclude that the bidding competition had not managed to locate a natural gypsum that would fill our quality requirements. The first route we had tried out turned out to be a dead end.

With my hopes up high, I approached Finnish plasterboard manufacturers. I sent emails and made calls, but was not able to find a willing seller for the 100 tonnes of gypsum we were looking for. One helpful contact guided me onwards, but sooner or later I was always up against the walls of the labyrinth. I learned that there is gypsum and then there is gypsum.

Next, I searched abroad.  Google found gypsum mines on the other side of the Baltic Sea (in Latvia and Poland). With the help of our local interpreter, I negotiated for the gypsum in Latvia and Poland, but judging by their prices, their article must have contained nothing short of precious metals. What was more, the interpreter took increasingly long creative breaks when trying to find out the quality and price of the gypsum.  I felt the clock was ticking – we were well into the final year of the project, and we needed to decide whether we would use the project budget for natural gypsum or not.

I expanded my search to Germany. There I managed to locate a helpful seller, who was quick in providing me with the product information label for German gypsum. The quality of the gypsum was assessed to be good, and the price competitive. On the final stretch of our negotiations, however, we ran into a new problem: the gypsum is sold dry, not moist, which meant we would have needed a separate set of equipment to handle it: a trailer tank for transportation, a silo for storage, compressed air for loading, and drop hose applicators for spreading. We were even able to come up with some creative alternative solutions for this set of equipment, but then corona hit, and the gypsum taps of Germany were closed. I was left in disappointment, scratching the walls of my labyrinth.

But then! A stroke of good luck. Juuso Joona from Soilfood let me know that Spanish natural gypsum will be available through them. This sounded good – were we finally about to get lucky? However, the product information label of the previous batch of gypsum that had arrived seemed very peculiar. We waited a while for the information on this year’s batch, and luckily it turned out to be what we had hoped for. After receiving the analysis results, we were able to assess how much gypsum we needed to spread, and make an order.  We had finally found a way out of the labyrinth!

In truth, the road was long and winding even after this, until we were finally able to spread the natural gypsum on a field in Nurmijärvi, where it would fight erosion and phosphorus runoff. The pile of gypsum gleaming in the sun looked so exotic that we were afraid it would contain if not actual diamonds, at least some impurities. The glass-like substance was however silica, which is naturally found in gypsum. Even in the morning of the day the gypsum was to be spread, our contractor called to tell us the hydraulic hose was broken and the spread would have to be delayed.

Still, we can now let out a sigh of relief and say all is well that ends well! In September, I witnessed how gypsum was spread on the fields of the Kranni farm in Lepsämä. The morning turned out to be a veritable experience: I also saw the farm’s mill, where the oats grown in the gypsum-treated field will next year be further processed into oat flakes. As the thick fog of an autumn morning vanished, it was such a relief to be finally able to witness – a wonderful pile of gypsum! 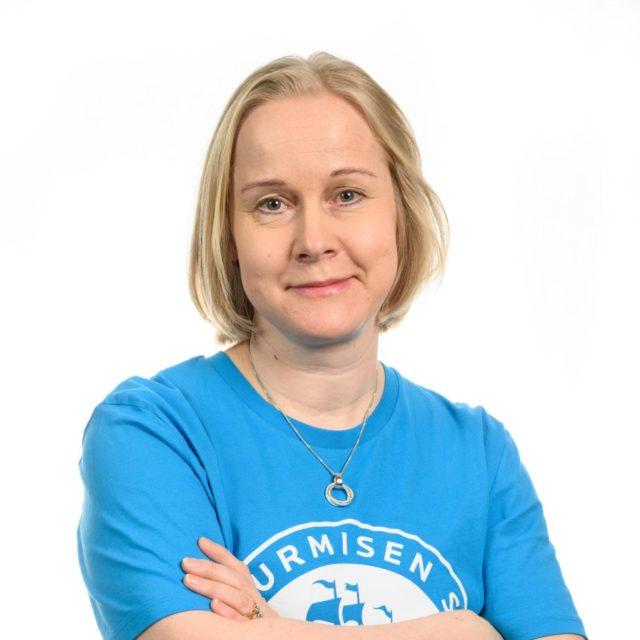 Anna Saarentaus, M.Sc., beached in the Foundation five years ago, led NutriTrade as her first project at the Foundation: the project dealt with nutrient discharge trading, and had gypsum treatment as one of its pilots.  Later, Anna was in charge of the River Vantaa gypsum project, and is now taking gypsum to the world in the international Gypsum Initiative project. In addition to these projects, Anna has taken deep dives into the joint treatment of industrial and municipal wastewaters within the BEST project, and built the Foundation-led Sustainable Biogas project, launched last summer.

Anna is a systematic, decisive and gutsy project manager; for her, nothing is impossible. By education, Anna is a forester. When not working, Anna spends her free time enjoying nature and her cottage. Every autumn she delights other Foundation staff members with apples and plums from her garden.

Gypsum Initiative
Gypsum Initiative
The project disseminated information to the countries around the Baltic Sea on treating agricultural fields with gypsum as a means of efficient water protection, and investigated the applicability of this method in these countries.
Read more