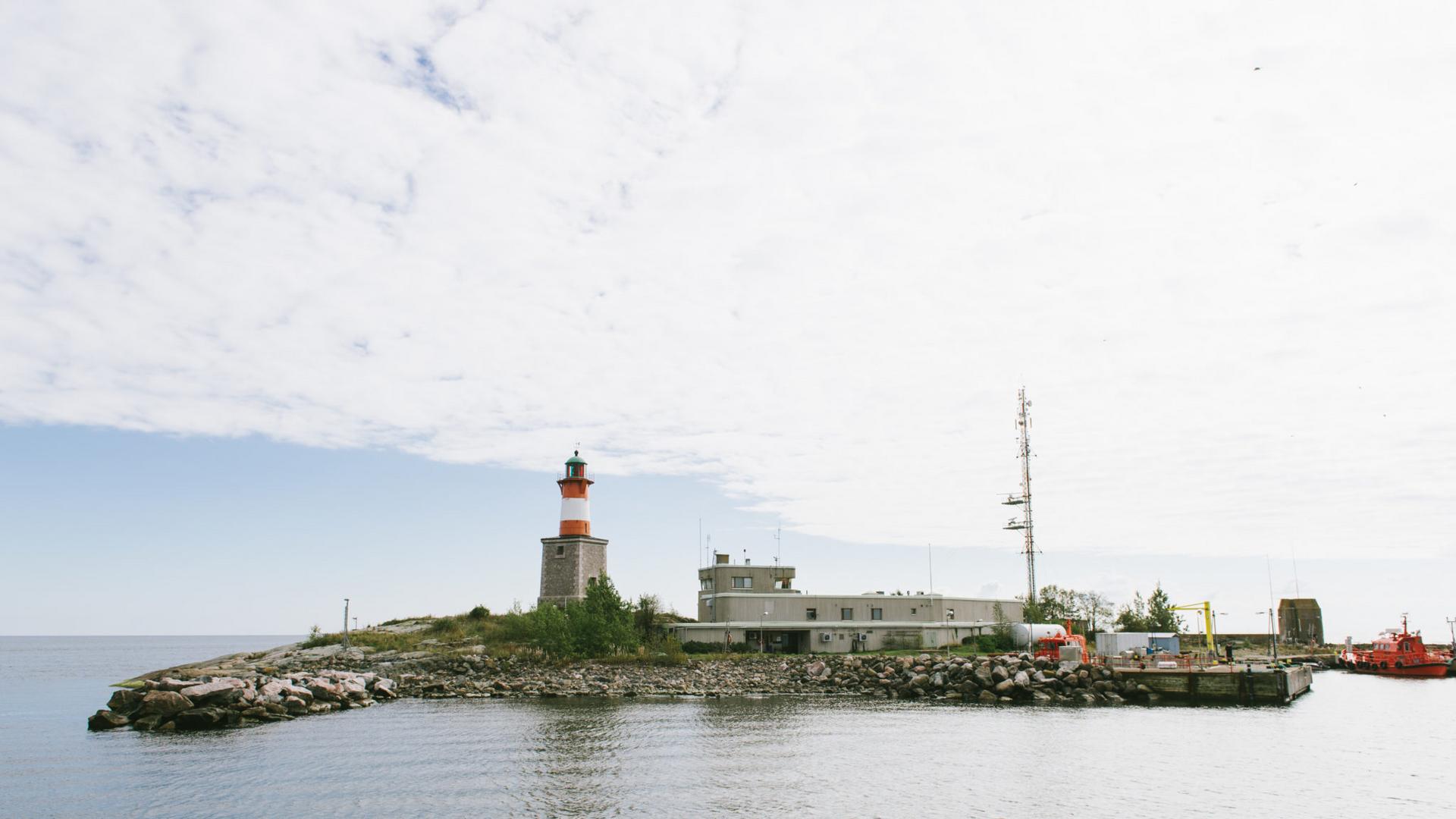 The Harmaja lighthouse, a poetic symbol of marine Helsinki, is not open to tourists: it’s an active pilot station with 10 pilots, 10 boat men and a cook. Ships are piloted via Harmaja to all the harbours of Helsinki: Vuosaari, West Harbour and the South Harbour. In the summer, the pilots are also kept busy by active cruise ship traffic. The Harmaja lighthouse is owned by the Finnish Transport Agency. The land area and other real estate are owned by Finnpilot Pilotage Ltd. (Finnpilot Pilotage). Already in the 17th century the fairway from the sea to Helsinki wound its way between the islets of Harmaja and Lågharu. A stone ruin on Harmaja served as a beacon. The wooden beacon towers (“pooki” in Finnish) were built in the 18th century. In 1883, the wooden beacon was replaced with a lighthouse. Its location was chosen so that the safe entrance created by the lighthouse and the Suomenlinna church would remain intact. (Seppo Laurell).
Photo by Ilkka Vuorinen.

Every year, the John Nurminen Foundation invites its corporate sponsors and other partners to the Clean Baltic Sea Club, where current topics on the Baltic Sea are discussed. The progress and financing status of the Clean Baltic Sea projects is also communicated at the event. The event, hosted by Finnpilot Pilotage, was organised for the fifth time in early September this year. This year, the renewed event took place on a cruise in the waters of Helsinki. Finnpilot Pilotage, the host of the event, operates at the core of Baltic Sea protection, and provided guests with a thorough introduction pilotage as well as the rare opportunity to get to know the unique Harmaja lighthouse.
Matti Pajula, CEO, explained that the most important task of Finnpilot is to promote the security of seafaring and the marine environment, and to prevent accidents by assisting vessels as they move safely on the fairways.
Pajula said that the core task of a pilot has remained the same throughout centuries: just as their colleagues did hundreds of years ago, pilots today also climb to the bridge of a ship and help the vessel enter the harbour safely. In bygone times the captain of the ship would never hand the ship’s steering over to the pilot; today, this happens more and more often. This is no wonder, as the Finnish coastline is one of the most difficult to navigate in the whole world. For most of the year it is also cold and dark, and the annual ice coverage in no way diminishes the challenge. Only a pilot with thorough knowledge of the local fairways can manage in these shallow and rocky waters.
Compared to many other marine routes of the world, Finnish pilots work in exceptionally demanding circumstances. Kari Kosonen, pilotage director, explained that only the most skilled individuals can become pilots. All Finnish pilots are experienced ship captains. Generally, a new pilot will have at least 10 years of experience as a ship officer under his/her belt.

Every euro invested in pilotage is returned threefold

Last year, Finnpilot piloted approximately 25,000 ships, which is an enormous number. Of these, nearly a fifth had some kind of an incident, and there were almost 60 actually dangerous situations. Had the dangerous situations led to accidents, the cost of the damages would have been close to €100 million. On the other hand, pilotage fees amounted to roughly €35 million. We can therefore calculate that every euro invested in pilotage will create a return of three euros. This is a good ratio for shipping companies and Finland in general. The benefits do not stop at business, but extend also to the environment: often, the prevention of an accident equals the prevention of an oil spill.

In his speech, Juha Nurminen, chairman of the board of the Foundation, analysed the dual nature of the situation last summer. In the east, i.e. in the Gulf of Finland, waters were as clear as ever witnessed, whereas west of Hanko we had blooms of blue-green algae that were miles long. The main reason for the disaster in the west was the great phosphorus reserve, collected over time in the abysses of the main basin of the Baltic Sea and pushed to motion by winter storms. Blue-green algae need phosphorus to grow, and another factor accelerating their growth is warmth. The warm July did, in fact, result in the exponential spread of blue-green algae.
The exceptionally hot summer was a veritable acid test for the condition of the Gulf of Finland. Nevertheless the waters remained clear. Two individual actions have had the greatest impact on the unprecedented clarity of the Gulf of Finland: improved nutrient removal from the wastewaters of St. Petersburg, and the cessation of phosphorus discharges from the Kingisepp gypsum pile. The Foundation has played a major part in both achievements. Nurminen was delighted to point out that it has now been proven how concrete measures can also lead to concrete results.
He also mentioned that the fastest and most efficient way to improve the status of the main basin of the Baltic Sea – and consequently the status of the Archipelago Sea – is to cut the discharges from the main individual sources in Poland, the Baltic countries, Kaliningrad and Belarus. Unfortunately there are no miracle cures, but this summer was enough to prove that we can achieve a visible change in the status of the sea during our lifetime.
Researcher Emil Vahtera from the City of Helsinki environment centre mentioned that old sins slow down the recovery of the Baltic Sea. Water in the sea mixes slowly, and the internal load caused by decades of excessive nutrient discharges makes the situation even more difficult. This is why the status of the marine areas in Helsinki can only be called tolerable. The key issue, however, is that the sea will recover if determined effort is made to cut external discharges. As an example, Vahtera mentioned that when the efficiency of nitrogen removal from Helsinki wastewaters was improved in the late 1980s, this could be seen relatively quickly in the local improvement of the sea’s status.

Club Renata: for the youth and the sea

To close the event, we sailed towards the Club Renata premises in Susisaari, Suomenlinna. The founder of Club Renata, Antti Etelämäki, explained that the purpose of the club is to safeguard the cultural history associated with the sea. An important part of the club’s operations is to provide youth who have difficulty finding employment inspiring experiences on the sea; this is done in cooperation with other marine stakeholders and service providers for children and the youth. Another goal of the club is to renovate Renata, a 6mR boat built in 1929.
The event came to its conclusion with circumnavigator Eero Lehtinen and designer and professor Hannu Kähönen, who shared their thoughts on the deeper meaning of sailing. The circumnavigator and sailing expert Eero Lehtinen, whose memoirs were published in the spring by the Foundation, spoke of the dynamics within a boat crew as they sail around the world. Preparations for the journey include so much more than sailing itself: you need to find financing, recruit the crew, define tasks and prepare… Sailing is not only physically hard: the proximity of the crew and the lack of private space place tremendous challenges on leadership.
For Hannu Kähönen, the sea provides powerful esthetic experiences and is an important source of spiritual balance. When sailing, you become one with nature: coupled with the perspective created by the horizon, being at the mercy of the sea teaches you humility and gives you the opportunity to find calm and purity. The water and the waves symbolise purity – according to Kähönen, this is true all over the world.