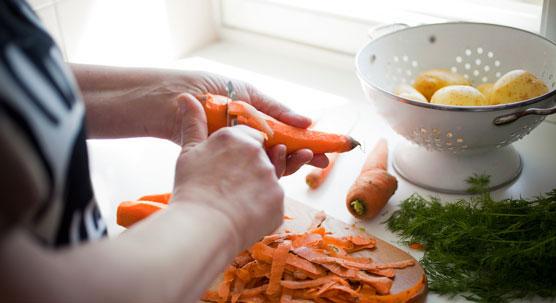 The easiest way to reduce nutrient pollution is to eat more domestic wild fish and vegetables.

The Baltic Sea calculator is the first of its kind in the world. Even though the calculator has been prepared by top experts, the knowledge base must still be expanded.

“The calculator covers the most important sources of pollution arising from consumption. It provides a new perspective on how consumers can help to improve the state of the Baltic Sea,” says Jyri Seppälä from the Finnish Environment Institute, who has been in charge of the project.

Baltic Sea footprints produced by consumers can be very different, both in terms of their size and profile.

“For example, the Baltic Sea footprint of a resident of Helsinki who does not eat meat is 20 per cent smaller than the footprint of a Helsinki resident who has a mixed diet,” explains Merja Saarinen from the Natural Resources Institute Finland.

“At the same time, the Helsinki resident with a mixed diet can reduce his footprint by 75 per cent by halving his meat consumption and by filling the gap with wild fish caught from the Baltic Sea,” Saarinen continues.

Results partially depend on the effectiveness of wastewater treatment

The pollution caused by consumption also depends on where the consumer lives as there are substantial differences in the wastewater treatment results between municipalities. There are particularly wide gaps in nitrogen removal rates, from about three per cent to 90 per cent. For example, in Helsinki wastewater discharges account for less than 10 per cent of all pollution arising from consumption, a result of effective wastewater treatment.

Spending time at holiday homes, horse riding, harness racing, golf and boating are the leisure activities included in the calculator. Horse riding and harness racing in particular have a major impact on consumers’ Baltic Sea footprint, a result of the large area of cultivated land required for producing feed for a large animal and the fact that the pollution generated by the horses is caused by the need of a relatively small number of people.

More detailed information about the use of agricultural land

The calculator is based on statistics, models and research findings. However, there is not yet enough background information available on all areas. For example, it is still impossible to fully determine how organic farming and pets contribute to nutrient pollution in the Baltic Sea.

“It should also be remembered that in addition to the nutrient pollution aspect discussed in the context of the calculator, there are also other environmental factors, such as climate, biodiversity, and the purity and safety of food that may be important to consumers,” Jyri Seppälä adds.

The Baltic Sea calculator was first suggested by the newspaper Helsingin Sanomat after which the John Nurminen Foundation also became interested in the idea. The calculator was produced by the Finnish Environment Institute (SYKE) and the Natural Resources Institute Finland (Luke). Funding for the project also came from the Ministry of Agriculture and Forestry, the Ministry of the Environment, the John Nurminen Foundation and Helsingin Sanomat.

Phosphorus and nitrogen, the nutrients responsible for most of the eutrophication in the Baltic Sea, are considered in the calculator and the most important factors contributing to the pollution and neutralising it are also included. Nutrient pollution is caused by food production, wastewaters from municipalities and scattered dwellings, wastewater generated at holiday homes, energy consumption, mobility and other consumption. Catching and consumption of wild fish are factors neutralising the impacts of nutrient pollution.

The Baltic Sea calculator (in Finnish)